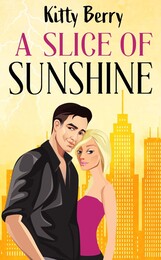 A Slice of Sunshine (A Grumpy vs. Sunshine, Single Mom, Hidden Identity Rom-Com) is Book 1 and happens in April.
Trevor McCallister is a rain cloud on a sunny day, a grumpy, bad-ass drummer from Chicago who arrives in New York City on April 5th—National Deep-Dish Pizza Day.
Sandra O’Reilly is a ray of sunshine on a cloudy day, a law student and single mom working at Pie in the Sky to make ends meet.
When a rain cloud collides with a burst of sunlight, will it create magic or is New York about to be hit with the worst storm ever? 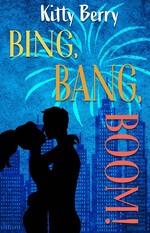 Bing, Bang, BOOM! (A Different Worlds Colliding Rom-Com) is Book 2 and happens in July.
​Tom O’Reilly is a wealthy New York City lawyer born with a silver spoon in his mouth who takes on a ludicrous case in the world of romance authors.
Hayden Wiggins is a social media influencer born into a working-class family who has found her audience in the romance book world until a lawsuit is filed against her for using one little play on words.
That one word pushes the two together and causes an explosion in the New York City court system. Will the case bring love or is New York about to detonate like fireworks in the sky? 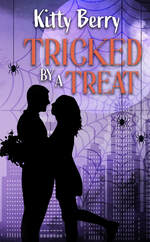 Tricked by a Treat (A Friends to Enemies to Lovers, Forced Proximity Rom-Com) is Book 3 and takes place in October.
Klay Locke is an All-American boy. An only child who is accustomed to getting what he wants, when he wants it. Well, expect for the girl he grew up with and years later, is still secretly pinning over.
Gina Dompiello grew up in the perfect neighborhood. The families in her neighborhood were best of friends and so were the kids. Well, expect for her and Klay Locke. They had been friends at one time, but then high school came about, and Klay changed.
Now, the families from the old neighborhood are coming together for another of their signature Halloween parties and the two will see each other again after years of not speaking.
Will Klay still be that bully that plays tricks on Gina? Will Gina remain the only treat Klay never gets
​Trick-or-Treat
Again, they’ll meet
Will there be super-steamy heat?

The Divorce Interlude (A Marriage in Crisis, Second Chance Rom-Com) is Book 4 and takes place in January.
Corey Roland was a happily married man until his wife shut him out of their relationship. He never wanted to be a cheater, but while on a break, he succumbed to temptation.
Delaney might still love Corey, but she also can’t seem to find it in her heart to forgive him and move on. She pulled away from their marriage when she needed him most, but it’s his infidelity keeping her at bay now.
After signing divorce papers on National Divorce Day, will they finally go their separate ways, or will a farewell embrace bring their family back together?

Late Bloomer (An Age Gap, Older Woman Younger Man, Male Virgin Rom-Com) is Book 5 and takes place in May.
Gavin Malick has done almost everything early—born three weeks before his due date, finished undergrad with a double major in two and a half years, graduate school in six months. With a great math mind, but not a play in his game book of love, the actuary for the Maine Titans is the furthest from being a player. At twenty-five, the dude is a hopeless virgin.
Lily Botane is never in a hurry. Growing up in small-town Falls Village, Maine, the florist always stops to smell the flowers. Unfortunately, her green thumb and penchant for matchmaking hasn’t made the fifty-three-year-old lucky in love. Always the wallflower, never the life of the party, Lily has given up hope of finding her match.
On National Nerd/Geek Pride Day, the stars align and bring the two together for what many call a taboo encounter. Even though the numbers don’t add up, will the unlikely match cultivate a lasting relationship?

Whoopsie! (An Accidental Pregnancy Rom-Com) is Book 6 and takes place in August.
Daisy Florelli knows what she wants and what she doesn’t. The last thing on her list is to be tied to an athlete for the rest of her life like her mother. But thanks to one night of fun that turned into a booty call and wound up as an ongoing hookup, she’s pregnant with one’s baby.
A cleat chaser might thank the stork for a baby that binds them to a six-foot NFL lineman built of solid muscle, with emerald-green eyes, and a mouth made for sin—but not her. All it gives Daisy to look forward to is a body wrecked by a baby guaranteed to be too large for its exit route and life as a bitter single mom like hers.
Killian “Killer” Velez is a crabby, self-proclaimed hater of romance and relationships. He certainly has no plans of having a family. That is, until one annoyingly irresistible woman, oddly obsessed with flowers and watermelon, catches his eye, and turns his life into one big blind spot.
That was three months ago and ever since, the football player has been kidding himself into believing the one-night stand hasn’t tuned itself into a relationship.
By National Watermelon Day, the baby they’re expecting is the size of a prune, and Killian’s sour demeanor is about to get even worse when he finds out Daisy has a watermelon in the oven. Will the couple make a fruit salad out of their mess, or will Daisy be left alone with a baby and a bowl full of discarded seeds?